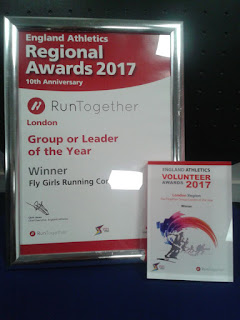 The Fly Girls Running Community are a group of local women mostly from the London Borough of Brent who meet up for weekly runs, inspiring others as they set off every Sunday morning at 9am to run together at the national stadium, Wembley. Women of all ages and abilities assemble together in the municipal offices at the civic centre before they move off upstairs at the stadium for their warm up exercises. The run is for girls over 14 to senior women but particularly targeted at the older population and women from African, Caribbean and Asian heritages, who have higher rates of health inequalities.


We are a get me started run together group, and we started initially as 3 women back in the first Sunday of October 2016. By getting people started the group encourages people who are new to running and/or being active. New members feel welcome in this friendly group where members are non-competitive and the individual decides whether they wish to run or walk. Those who are new to running take it step by step, gradually going from walking to slow jogging up to 2km, 5km or beyond.


Our members meet on a weekly basis and some have now gone on to do additional running in the week with Run Wembley or near to their work. Running at 9am on Sunday mornings is refreshing, a visitor runner who recently ran with us commented that "it's great running in this non-polluted area, and people should take advantage of this space."


Running around the iconic Wembley Stadium is also another attraction as some participants were enticed to join because of the area we run. It is also a safe space and quiet for running, unlike some parks where there are many distractions that can be off putting for women who are not comfortable to run in public.


The idea came about as i felt it was missing, there was a need for running groups that welcome and are solely for beginners who are in it for their wellbeing rather than for races. However members set goals to do races as a bonus when their distances improve. I am a light weight runner, and have felt pressure when running in groups with a quicker pace. Having run over the years alone also, i know can be demotivating, if you decide not to go for a run, no one holds you accountable. Running is a necessity for me as i intend to improve health concerns. With these thoughts in mind and a drive to bring community together i initiated the Fly Girls Running Community. Why the name Fly Girls? It is very catchy and has lots of positive meanings, besides it was the name of my memoir travel book A Fly Girl.

So in one year we have gone on from 3 members to around 30 registered, with on average 8 regular attending members weekly. We also are winners of the Run Group & Leader of the Year (London Region) from England Athletics , an award our members feel honoured to have. The Brent Magazine reported Fly Girls Victory in the current winter edition of the magazine, and we want you to be victorious with us. Join us if you are in the area 🏃🏃🏃🎽🎽 , we look forward to welcome you 😊.

If running is not your cup of tea, get in touch to find out about our aerobic boxfit/dancefit classes.